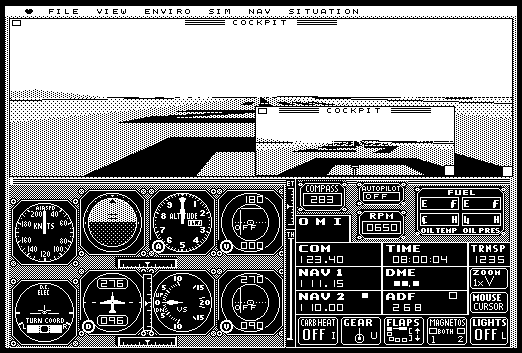 From the Flight Simulator Website:
In 1982 Microsoft released the first version of Flight Simulator for the IBM PC. Like all other versions this one too was created by subLOGIC. Essentially this was the true predecessor of our current version with a more or less complete panel and a 3D out-of-the-window view above. The next comparable release was FS II for the Apple II in 1983 by subLOGIC itself, followed by similar releases for the Commodore 64 and Atari 400/800. In 1984 Microsoft released an improved version 2.10 for the PC. All these versions together formed the second generation of the Flight Simulator series.
In 1985 subLOGIC released new versions of Flight Simulator II for the much more powerful Atari ST and Commodore Amiga computers, based on the 68000 processor and equipped with a Windows-like operating system. The new versions made good use of the new menu system and, although still numbered FS II, one could argue that based on the many new features and new menu system, these versions essentially belonged to a third generation and should have been numbered version III.
Around the same time Apple released its new Macintosh computer, also based on the 6800 processor. Macintosh users however had to wait till 1986 for their new version of FS to arrive. Like those for the IBM PC, this version was created by subLOGIC, but marketed by Microsoft. Because the Macintosh initially only had a black and white screen, FS 1 for the Mac was released as a monochrome version only, but with a much higher resolution! See below. The high quality b/w screen probably was the reason that Charlie Gulick used the Mac version for the illustrations in his famous book "Flying Flight Simulator: Co-Pilot" (1987) for the Amiga, Atari ST and Macintosh.
This item is the slightly enhanced release 1.02 (1986), still featuring the black and white display. In hindsight it should have been called FS 3.0 for the Mac! If you want to know more about that early history (1980-1988) of Flight Simulator, its creator Bruce Artwick and the respective roles of subLOGIC and Microsoft please pay a visit to the Flight Simulator History website.